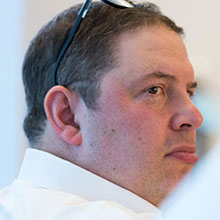 The inaugural meeting of the Reuter Society of America on Wednesday drew around 35-40 people and in the process signed up the first tranche of members.

Many regrets and pledges to join the new organization were made in the lead-up promotion of the event, which centered on an address by Andrew Rashbass (photo), CEO of Reuters, and Dayan Candappa, Americas editor. In their jobs for under a year and half, each gave an assessment of their efforts to date and their view of Reuters news in a dramatically changed world. They were joined in a panel I chaired by former Reuters executive and journalist Andy Nibley, acting as interlocutor from his position today as a working CEO some 15 years out of the company.

We agreed to a request by Rashbass not to report on the presentation details. However I believe it is safe to repeat his view that Reuters’ signal attribute, in addition to adherence to the highest values of news reporting, is that the organization from its inception has been adroit and adaptable.

So it is today, he said, and the Reuters news business is changing at a rate and in a fashion he said he is comfortable with in the face of all competition.

Candappa repeated his newsworthy notice to staff this year that article length should stay below 500 words, except for unusual circumstances, the firmness of which, he emphasized, is nevertheless open to editorial decision. He added this goal does not stand in the way of appropriate long-form journalism.

Attendees were mostly from the New York area, but others were on hand from farther afield, including Chicago and Washington, DC. One challenge in creating the RSA is to address the far-flung nature of the diaspora. That will be part of the next steps of actually getting the organization operating, along with an election of officers.

Dick Satran, who did the bulk of the hard work organizing this inaugural event, deserves great credit for our launch. Special mention too, to Bob Hutton, Nancy Bobrowitz, Betty Wong, Cathy Arnst and John Abell for coordinating efforts and ideas. Others supporting the launch process included Lewis Knopf, Richard Pisani and Mike Conlon.

The RSA is open to all former employees of Reuters and Thomson Reuters. Members of the London-based Reuter Society are automatically included in RSA membership. The growth potential for both organizations is substantial. Satran told Wednesday’s audience that a rough Google search for people in the category worldwide turned up over 400,000 names! That number, if course, remains to be substantiated. ■