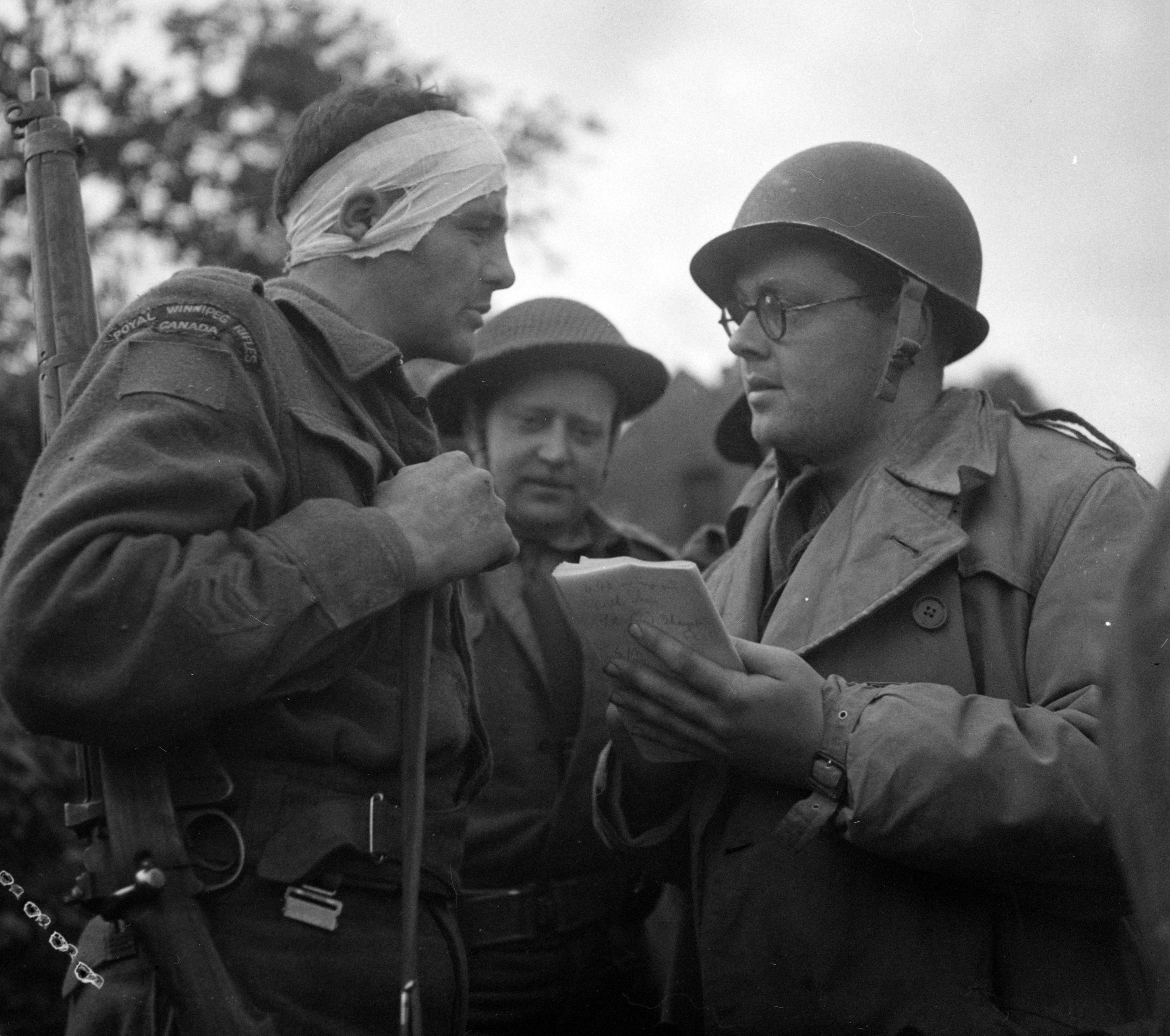 Publication in Canada of a gripping biography of news luminary Matthew Halton, whose dramatic coverage of World War II went out mainly on Canadian public radio but periodically on the BBC, has served to revive the name of a flamboyant Reuters reporter of the same conflict who also hailed from Canada.

This was Charles (“Charlie”) Lynch, a self-described journalistic apprentice to the veteran Halton on D-Day and an associate thereafter.

The new biography of Halton was written with revealing detachment by his newsman son David under the title Dispatches from the Front (McClelland & Stewart, Toronto). It covers a life that started in tiny Pincher Creek, Alberta, with Matthew as offspring of homesteading immigrants from Lancashire. It then took him from trouble-making college journalism and on to a brilliant 1930s highlighted by his controversial exposure of the realities of Nazism in Germany and civil war in Spain for the hard-driving Toronto Daily Star. 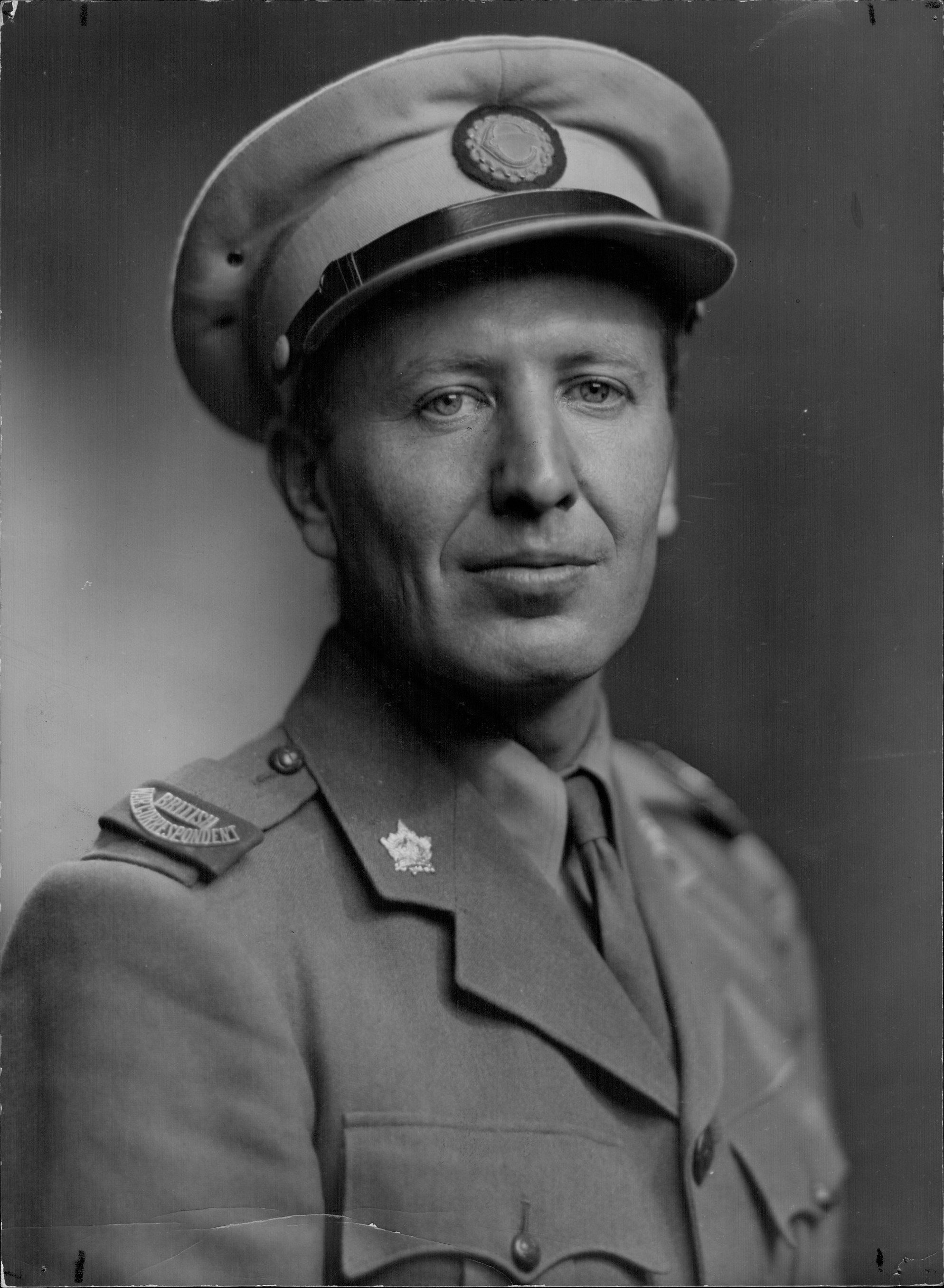 In 1940 came coverage for the paper of the Finnish-Russian war followed by months spent as the Star’s man in embattled North Africa and points east. Halton switched to CBC radio of Canada as broadcast witness to the Canadians in the grinding Italian campaign.

After that there ensued D-Day and a year’s west European action recounted by him with graphic “voicers” to the CBC about Canadian campaigns as well as the liberation of Paris and a return on VE-Day to a now-devastated Berlin. Some of his reports were carried in both the UK and the US.

Halton’s post-war career was active (even including a column for a London paper) but anti-climactic and he died of a stroke in 1956 at age 52, presumably weakened by his wartime ordeals.

His 1944 D-Day join-up with Charlie Lynch was significant for Halton, starting with shared exploits at the invasion scene. Lynch had been hired for Reuters the year before by the company’s legendary “news manager,” Walton “Tony” Cole, who was visiting North America in search of potential correspondents suitable for the expected mainland-European onslaught. Lynch, then 23, was working for British United Press in Toronto.

David Halton, who has spent 40 years as himself a distinguished CBC journalist, quotes from Lynch’s ebullient 1983 memoir, You Can’t Print THAT! There, Lynch, long out of Reuters, recalled how he and “Matt” Halton made the cross-Channel trip together on D-Day aboard a converted Irish ferry carrying Canadian troops - and an ancient ferry-service piano. To relax the tensed-up soldiers, the youthful Reuterian played a variety of tunes on the rattletrap instrument. One in particular, Maurice Chevalier’s “Louise,” found singalong favour with the troops before the ferocious cannonade over the Canadian landing beach in Normandy drowned out the impromptu serenade.

Lynch later wrote of resorting to specially-provided carrier pigeons, only to see the story-bearing birds head off east towards Germany rather than taking the programmed route to their home loft in Southampton. “Traitors! Damned traitors!” an exasperated, fist-shaking Lynch shouted after them.

The first assault at Graye-sur-Mer had occurred a few hours earlier. But all still seemed a body-strewn chaos as Halton and Lynch, laden with reportorial gear, struggled ashore. There, they predictably found a dearth of communications for the stories they managed to produce under fire. Lynch later wrote of resorting to specially-provided carrier pigeons, only to see the story-bearing birds head off east towards Germany rather than taking the programmed route to their home loft in Southampton. “Traitors! Damned traitors!” an exasperated, fist-shaking Lynch shouted after them.

He won plaudits from Cole for his subsequent battle stories but reflected half-humourously on his pigeon outcry in the 1983 memoir: “It has always bothered me that, when they made the movie about D-Day [called] The Longest Day, they depicted the Reuters man uttering that cry in effete English accents, assuming that anyone working for Reuters must be a Limey. This was a Canadian cry, and it came from the heart.” 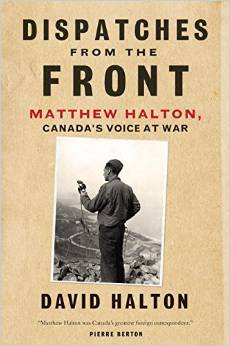 David Halton also cites the Lynch book’s unsparing, first-hand account of an incident involving the senior Halton and a fellow war correspondent, one Ernest Hemingway, at a well-attended (and well-lubricated) “war-co” feast held at a restaurant near the Mont St Michel medieval monastery during a military lull. At one point, correspondent Halton told the famous fictioneer (also a Toronto Star alumnus) how he admired the latter’s creative work - adding, however, that he thought the love scenes therein fell somewhat short of Hemingway’s high standards.

According to Lynch, the future Nobel laureate began to fume at this and, despite Halton’s efforts to mollify him, exploded as follows:  “Any fucker who fucking well says I can’t write about fucking is a fucking liar. And you, Halton, are full of shit”. Hemingway, flushed with alcohol, then stormed out.

Following the war, Lynch stayed on with Reuters, covering the first four months of the Nuremberg war crimes trials and performing senior roles in Rio de Janeiro, Ottawa and New York before leaving in 1956 to become CBC’s United Nations correspondent. He was still in New York when news reached him that of Matt Halton’s death. Lynch told David Halton of bowing his head and weeping for long minutes. 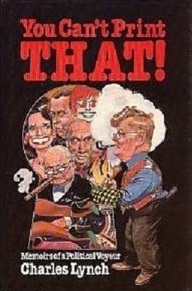 Two years later, Charlie Lynch, aged 39, took a top newspaper position back in Canada and by his retirement in 1984 had become a celebrated figure in both the print and TV branches of the Canadian media.

For my part, I audaciously wrote a fan letter in the early Fifties to Matthew Halton, master of written and spoken news-prose. How did a journalistic aspirant best learn the craft of composition, I asked at the end. Surprisingly, I had a reply. “You learn to write by writing, writing, writing,” it said.

PHOTOS: Charles Lynch interviewing Canadian troops after the D-Day invasion of Normandy, Matthew Halton in the uniform of a war correspondent, and the covers of Dispatches from the Front: Matthew Halton, Canada's Voice at War by his son David Halton, and Charles Lynch's book You Can't Print THAT! ■