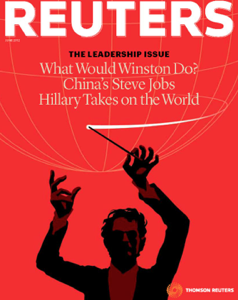 While highlighting the diminishing value of Reuters services to clients, the Independent article of 15 August [Reuters faces 'unprecedented identity crisis' - report cites both Eikon’s technical problems that have driven customers even further into Bloomberg’s arms, and editor-in-chief Stephen Adler’s drive to compete for consumers of news beyond the confines of the feeds into financiers’ desktops. It refers to this latter effort as a “byline arms race” with Bloomberg, in which commentators such as The Times’ Anatole Kaletsky have been hired.

It would be very interesting to know how much actual value in substance and revenue such high flying names as Kaletsky, Sir Harold Evans and other immigrants bring in their luggage. I think one can assume they’re not working pro bono and receive remuneration (to use that awful euphemism) far in excess of the salaries of the Reuters regulars on the front lines of fighting and finance.

As one example I note the publication of a lavishly produced and illustrated “leadership” issue of the Reuters magazine for the Aspen Institute’s Initiative on Financial Security in June, in which Adler, also the magazine’s editor, said the goal was to explore what kind of leadership is likely to be most effective in this time of rapid change and rampant uncertainty. The magazine itself must have taken up a lot of time and money.

As part of the leadership search, Adler called upon editor-at-large Evans, “the longtime lion of British journalism to conduct a kind of thought exercise: What would Winston Churchill do faced with today’s seemingly nonstop financial and political crises?”

But in a long, undoubtedly elegant piece that evoked the past, including the author in short pants huddling with his mom and two infant brothers in an air-raid shelter in Manchester 70 years ago, there was precious little on what Winston would actually do today.

Evans merely cited today’s global leadership vacuum, “with poll-driven politicians in another place altogether from Churchill.” He said Europe sorely missed having someone with Churchill’s grand vision. Winnie, he continued, would have ardently backed closer European political union provided it didn’t impede Britain’s special relationship with the US, would have distrusted the embrace of austerity and would have been a stalwart for taking out the Taliban after 9/11 while opposing prolonged entanglement in Afghanistan. And he would have been unlikely to have backed the invasion of Iraq as Blair so eloquently did. Hardly a substantive scenario of how Winnie might have dealt with Adler’s “rapid change and rampant uncertainty”.

As another example of the new approach, I note the frequent appearances of Reuters Digital Editor Chrystia Freeland, who is the magazine’s deputy editor, on the talk show circuit in the US. She also girds the globe interviewing various leaders. Both the TV appearances, which I personally find lacking in insight, and her interviews may serve to raise the brand’s profile, but do they in fact achieve anything substantive?

Bloomberg is on a roll with its user-friendly platform, so it can afford the byline arms race. But I fear that with these very highly paid stars Reuters may be shortchanging the bread and butter that clients need and which keep the news services from starving to death. ■